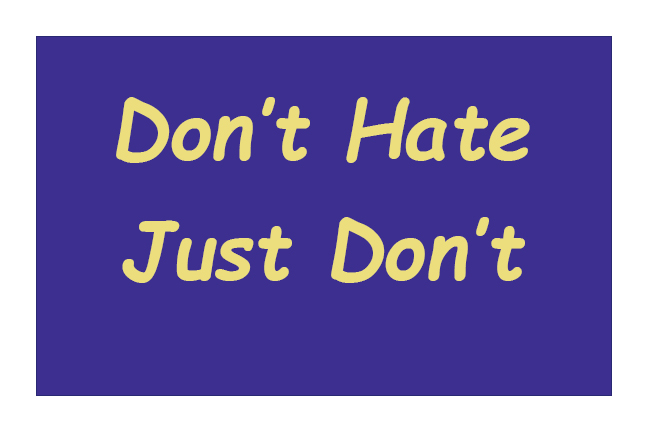 That situation was complex and not all family members bought into the Amazing Grace expressed in that courtroom and that is Fine and totally understandable.

An appropriate response to expressions and actions of evil can take many forms but does this one thing: it weakens the influence of evil.  Hope, faith, optimism, perseverance, kindness, gratitude, forgiveness, telling the truth, resolute conviction that Christ Won the battle on the Cross and Nothing can change that.  Nothing.

I would have a T-shirt that says “Love…Just Love” but the word “Love” is difficult to define; it is nebulous and covers a lot of expressions and actions.  But, you know Hate when you see it.  Hate has a smell.

Don’t Hate…just don’t go there.  Keep your mind on the good: think about the strong response of Christians and non-Christians alike…everywhere…who are showing compassion to the families of the ones who were killed.  If your emotions are over-powering, shift them to righteous indignation and rail against the evil one but do it in the Name of Christ and with the power of His blood.  No rancor.  Bless persecuted people, everywhere.  No spitting hate.  Praise the Almighty.  No condemnation.  Sing Hymns.  Don’t despair.  Hope in Life Everlasting.

I never thought I would praise ‘the media’ but when the media refuses to publicize actions performed to gain attention, they are doing the correct thing.  Do likewise.  Do not give your energy to evil.  Shift your reactions away from a negative response to a positive one…somewhere.

The bottom line:  the evil one wants us to hate, wants us to despair, wants us to be fearful and disheartened.  Do not give him the satisfaction.  Jesus Is Victorious.  He is With you.  The Holy Spirit will give you the words to say and the words to pray.  God is In Control.

Thanks be to God and to God be the Glory.

I bought the T-Shirt.  No, I really did.  I ordered two purple T-shirts with the words “Don’t Hate” on the front, and “Just Don’t” on the back.  I gave the second one to an engineering student who works at the Mall and is getting his degree at Clemson University.  If you are interested in getting a T-shirt like it, I ordered mine from Spreadshirt.

What are Your thoughts? Cancel reply